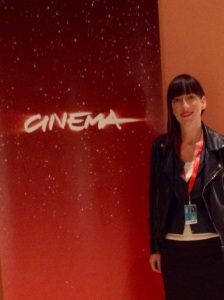 What has been your most difficult film to make?

“Fear of Falling’, my latest film, has been my most challenging film. It was years in the making, it was a play. Henrik Ibsen’s The Master Builder, which has been made for TV many times.”

“Its the boldest film I’ve made. It knows it’s a play, but it is celebrated in the form of a movie.”

He has made a ‘scary house’ movie out of this melodrama.” The classic long corridor shot, being the most scary shot in cinematic history.

“There is a place for Henrik Ibsen in 21st Century cinema. A mix of dramaturgy and different media. Its a different kind of visual feast, if you surrender to it.”

What are you wanting to do, genre wise, for your next movie?

“I have not turned my back on anything, genre wise. I was asked in 2005 to make an 85 million dollar movie. I’m still waiting for calls like that. I don’t want that type of responsibility. Is it really ok to be spending that amount of money in this day in age? Budgets of that kind of multitude. If a movie is great. Size doesn’t matter. I am never called to do Hollywood Blockbusters.”

“I love all aspects of film making. Everybody’s a story teller, from the writers, from Meryl to Denzel, the cameraman, the sound man, the lighting man. Story, story, story.”

Demme was a story teller and writer from day one. Being in the right place at the right time, as a publicity writer for United Artists in NY meant that Demme was sat across the table at a fated meeting between himself and his hero Roger Corman. Corman said “you write good publicity, do you think you could write a script.”

Demme delivered a script to Corman at the Hilton Hotel in London, and the rest is history.

Demme has never looked back.

Music is such a major ingredient in the artistry of movie making and Demme is the master of marrying cinema and music. He has made a business out of making movies about music.

“Music makes the story. Cinema brings an added dimension to music that is already beautiful to our ears, and make it exquisite.”

Demme wanted to work with music again, after working on his remarkable trilogy of concert films with Neil Young. Demme was so in awe of the lighting at a Talking Heads gig, he knew instantly it had to be a movie, so he worked with David Burns on a documentary. “Neil Young is tremendously cinematic in his vision. He loves the camera. It’s like the audience could not see what was in Burns head, because on stage live music the lighting is too muted, but I could.”

Who is Demme’s favorite composer? Enzo Avitabile, with whom he made his latest music documentary from Jonathan Demme, ‘Enzo Avitabile Music Life’.

Music Life delves into the world of musical instruments and the people playing them. Different people playing different instruments at the same time, which became a bonus theme of the  documentary, which was really meant to be a work about the people of Naples, but became so much more. You can’t have Naples without music. It won’t work.

“Enzo Avitabile is interested in musicians in woods outside of Palermo. The mix, the magic, a cross contamination, if you will.”

If you could make a film about any historical Italian figure, who would it be?

“Vittorio Arogoni, an Italian writer and peace activist who was murdered in 2008″

Arogoni (4 February 1975 – 15 April 2011) was an Italian reporter, writer, pacifist and activist who was credited as one of the many activists who revived the pro-Palestinian International Solidarity Movement (ISM) in the Gaza Strip, from 2008 until his death. Arrigoni maintained a website, Guerrilla Radio, and published a book of his experiences in Gaza during the 2008–09 Gaza War between Hamas and Israel. He was murdered by suspected members of Tawhid wal-Jihad, a Palestinian Salafist group in Gaza.

Demme cares about messages in film. A movie that he wants to make with a positive muslim theme is currently awaiting funding.

Demme, a man of morals, wants:

“Musicians play music together, so in the world we should all compose all sorts of things together in a positive way.”

Fear of Falling premiers at the Rome Film Festival this evening.